Callisto was a maenad in "The Southern Vampire Mysteries". She comes to the small town of Bon Temps, Louisiana in search of a tribute from vampire Eric Northman.

She is the secondary antagonist of the second book in the series, "Living Dead in Dallas".

At the beginning of Living Dead in Dallas, Sookie Stackhouse meets Callisto, who is accompanied by a feral razorback pig, in the woods. Callisto wants tribute from Eric and, in order to convey this message, Callisto claws Sookie, which poisons her blood. The maenad appears for the last time at the secret sex party at the end of the book. The drunkenness and the lust of the party participants attract her. She kills Mike Spencer and the Hardaways (who are revealed to have killed Lafayette), and most of the other party-goers, leaving a mess behind, which Bill and Eric clean up. It is implied that Sam and Callisto had a relationship, but she leaves Bon Temps to look for another tribute.

In the Southern Vampire Mystery, aka Sookie Stackhouse Novels, a maenad named Callisto travels to Bon Temps as an emissary for Dionysus, the God of Wine. Since no one formally worships the God of Wine, in contemporary times, she travels from location to location, demanding tribute from those who distribute the symbol of his power, alcohol (specifically wine). She comes to Bon Temps in search of the vampire, Eric Northman, to pay his tribute since he owns the vampire bar, Fangtasia, in Shreveport. Callisto injures Sookie with her poison claws as a living message to Eric.

After Dead: What Came Next in the World of Sookie StackhouseEdit

Callisto drifted over to the Middle East, where she caused dreadful bloodshed but went unnoticed.

She possess divine powers as a Maenad, given to her by the greek god Dionysus. She can release madness and lust, using it to control the people of Bon Temps and holding several bacchanalia.

She is immortal, invulnerable and is stronger than any vampire. In the book, Sam said that the Maenads like to literally rip apart the proud men. It is also suggested she possesses some means of tracking prey, as she was able to locate and attack Sookie in the middle of nowhere. Finally, she can turn her hands into large claws capable of secreting a powerful poison that no vampire blood can heal. 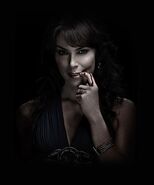 Add a photo to this gallery
Retrieved from "https://sookiestackhouse.fandom.com/wiki/Callisto?oldid=8548"
Community content is available under CC-BY-SA unless otherwise noted.