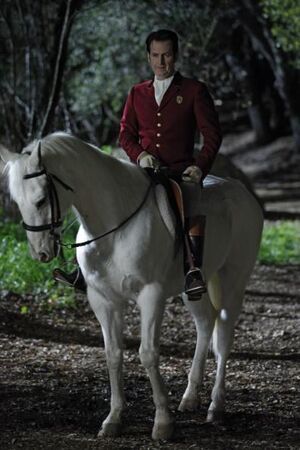 Vampire Politics refer to the political aspects of life, and how they relate to both vampires and humans. In "The Southern Vampire Mysteries", The United States of America is ruled by vampire kings and queens who strive for more power.

Though many vampires in the Stackhouse universe try to live among humans, they remain very secretive about their organization and government. The vampires parted the continental United States into four divisions (clans), each represented by a symbol: Moshup clan (Northeast states) - the Whale, Amun clan (Midwest states) - the Feather,

Zeus clan (Between Midwest and Pacific) - the Thunder Bolt and Narayana clan (Pacific states) - the Eye. A division consists of multiple Kingdoms, each controlled by a single lead vampire known as the King or Queen. A kingdom is then divided into areas (formerly known as fiefdoms), each controlled by a Sheriff who owes allegiance to the monarch.

The easternmost division, which is mostly the coastal states, is the Moshup Clan, named for the Native American mythical figure. Its symbol is a whale. Shown on map in red.

Almost all of the states that met at the Rhodes summit belongs to the Amun Clan. Its symbol is a feather, representing the feathered headdress of the Egyptian god Amun. Amun is comprised mostly of midwestern and southeastern states, including Arkansas, Louisiana, Mississippi, Alabama, Kentucky, and Tennessee. Shown on map in Orange.

To the west of the Amun clan is the Zeus Clan, named for the Greek god. Its symbol is a thunderbolt. Zeus includes Texas, Oklahoma, Kansas, Nebraska, the Dakotas, Montana, Wyoming, Colorado, New Mexico, Idaho, Utah, and Arizona. Shown on map in green.

To the west is the Narayana Clan, one of the names for Vishnu, from the Hindu religion. Its symbol is an eye, representing Narayana's creation of the sun and moon from his eyes. The clan is made up of only four states: Washington, Oregon, California, and Nevada. Shown on map in blue.

According to Eric Northman, Hawaii is autonomous.

According to Eric, Alaska is controlled by Canadian vampires.

Rival kings and queens often intermarry, both for peace and consolidation of power. These unions are most often political, as opposed to love matches.

An attempted takeover of a state is usually motivated by a desire for more power. The first attempted takeover was by Peter Threadgill, king of Arkansas and husband of the queen of Louisiana; his attempt to seize Louisiana ultimately failed. Subsequently, his widow, Sophie-Anne, inherited his state according to their marriage contract, a decision made by The Ancient Pythoness at the Rhodes vampire summit.

In later books, the King of Nevada, haven successfully taken over both Louisiana and Arkansas, may also be plotting to take over Michigan.

In Dead in the Family, Eric states that Alaska is ruled by Canadian vampires.

Before any state decides to take over a state from another clan, its ruler must consult with the other states in its clan. If the takeover fails, the clan will be weakened. Felipe de Castro did consult with Narayana Clan before the takeover of Sophie Anne's Queendom and they considered the situation and decided that Sophie-Anne had no chances to win and allowed him to takeover Louisiana and Arkansas.

Community content is available under CC-BY-SA unless otherwise noted.
Advertisement